“Then the terror of the Lord fell on the people, and they turned out as one man.” –
I Samuel 11:7b 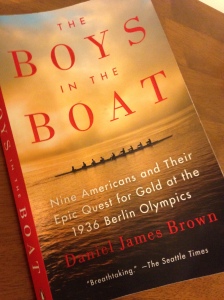 Rowing is a complicated sport. Much more involved and complex than I would’ve guessed. Then again, my only rowing experience was watching The Notebook where the character Noah was leisurely rowing himself and Allie, and all the swans were there…

But I just finished reading “The Boys in the Boat,” by Daniel James Brown, and there was some serious rowing talk in this book. The true story is about a college rowing team that went to the Olympics during World War II. These guys had to practice all during the school year, daily, many hours each day. Intense.

And as they progressed and the team was weeded out, they had to perfect working together, reading each other’s signals, rowing in sync. A quote from the book said this:

“All were merged into one smoothly working machine; they were, in fact, a poem of motion, a symphony of swinging blades.”

Like one smoothly working machine, he said. They made progress doing it this way. This is how they win.

When one guy was off, and lost focus, their whole team felt it. They each had to be focused and in the zone, going after the same purpose for this to work.

In I Samuel chapter 11, Saul had just been named king. He found out about another kingdom that was threatening the Israelites, making plans to gouge out their right eyes, when they were given a week to get a plan together. When Saul heard about this, he was given power through the Spirit of God. He sent a message to the people, inspiring them to stand up for God’s people. It worked. In the end of verse 7, we read, “Then the terror of the Lord fell on the people, and they turned out as one man.”

They turned out as one man.

Oh how much more could we accomplish for our God if we would turn out as one man.

If we could focus together simply on the things God is calling us to do, rather than get distracted by all the other things – the preferences, the selfishness, the not-doing-it-just-like-I-like-to-do-it – how many more people could we see living their lives for God?

For sure, there will be other things that need to be addressed, but when they take precedence over those three things, we have an official distraction. I can only imagine how much Satan would love to keep us focused on the other things just a little more than the things that matter the most.

But we can’t let that happen. Let’s promise to stay focused, and turn out as one man as we work together serving our God. I’m renewing my commitment today.